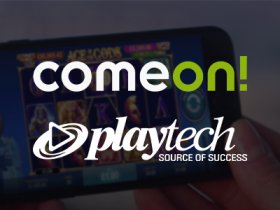 Playtech, one of the world’s most powerful providers of video slots and live dealer games for online casinos, has announced it reached a new agreement with the ComeOn Group, which owns and operates several international online casinos.

Under the terms of this deal, Playtech will offer its wide range of video slots along with their live dealer games to ComeOn Group, which will include the products across its entire portfolio of 20 well-known brands, including ComeOn!, Sunmaker, SunnyPlayer, Blitzino, Snabbare and Mobilebet.

The ComeOn Group was founded in 2008 and since then it has grown into a major player in the iGaming industry. The group now operates several brands in various jurisdictions, holding a vast number of gaming licenses as well.

Juergen Reutter, the Chief Executive Officer of ComeOn, revealed that the new agreement with Playtech “will play a key role” in his company’s plans to solidify its position in the market.

Shimon Akad, the Chief Operating Officer of Playtech added that the new partnership with ComeOn is another example of his team’s “commitment to partnering with the right companies to bring an entertainment-led experience to international audiences across key regulated markets.”

Revenue Drop For Playtech In 2020

Despite being one of the most powerful players in the market, Playtech recorded a significant drop in revenue in 2020, mainly because of the novel coronavirus pandemic. The company’s revenue for the year was 1.08 billion euros, down by 25.1% compared to what was recorded in 2019.

The main cause of this drop was the impact of the pandemic and the various restrictions on retail, as several land-based gambling locations had to be closed for months. This has significantly affected Playtech’s business-to-business (B2B) and business-to-consumer (B2C) operations.

The developer was founded in 1999 and has grown into a big global company in recent years. Now it has around 6,400 employees across 24 countries and its video slots and live dealer games can be found in many of the most popular online casinos in the world.