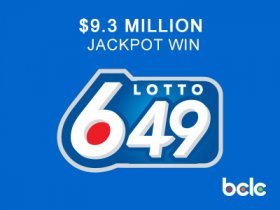 The British Columbia Lottery Corporation (BCLC), the state-owned Canadian gambling operator, has revealed that it has made a new millionaire in West Vancouver thanks to the draw-based Lotto 6/49 game.

Leslie Hasman, the lucky lottery player, hit the big win on the draw that took place on December 30, 2020. When he scanned the ticket, he noticed a huge number of zeros, he won 9.3 million Canadian dollars. The winner revealed that at first, he did not believe the numbers were correct since he was not wearing his reading glasses.

In fact, he was unaware of the win until he happened to be shopping at a local 7-Eleven and decided to scan his ticket. After realizing that he had won an immense amount, the player continued his shopping as if nothing happened. However, he later revealed that he doesn’t remember what he had bought after scanning the ticket.

The West Vancouver resident played the numbers 7, 14, 30, 32, 38, and 45, which he will probably remember for the rest of his days. He bought the ticket in a Lotto pack worth just 10 dollars.

Leslie Hasman said he will take his family on a trip to Hawaii, but not right away as travel is still restricted due to the coronavirus pandemic. The winner also revealed he intends to donate a portion of the prize to hospitals in Lower Mainland.

In 2020, lottery players in British Columbia redeemed more than 106 million dollars in winnings from Lotto 6/49. This is a nationwide lottery game drawn on Wednesdays and Saturday.

Last Saturday night two ticket holders were drawn as winners for the Lotto 6/49 jackpot offered by the British Columbia Lottery Corporation. The prize, worth 5 million dollars, will be split between an Ontario resident and a player from Prairies.

On January 23, Langley resident Eileen Bevis won the jackpot worth 4 million dollars. She later revealed that her decision to buy a Lotto 6/49 ticket happened by pure chance as she was on her way off of the local store.

There’s a new millionaire in Quebec as well, a lucky ticket holder won no less than 29 million Canadian dollars after guessing all the winning numbers from the December 2020 Lotto 6/40 draw.