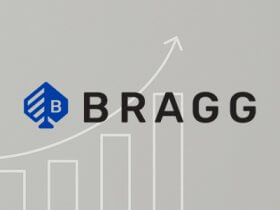 The negative net result is mainly due to increased employee costs and heavy professional fees associated with the company’s attempts to get listed on the NASDAQ stock exchange.

In June, Bragg Gaming announced that it had completed the acquisition of Wild Streak Gaming, a creative studio based in Las Vegas. The acquired developer had 39 premium slot titles in its portfolio and a solid team on the payroll.

The acquisition cost Bragg Gaming around 30 million dollars, 10 million of it in cash and the rest in the resulting company’s common share in the course of the next three years.

In May, Bragg Gaming made an almost identical acquisition in terms of price, they paid 30 million to acquire Spin Games, another up and coming studio based in Nevada. The acquisition of Spin Games gave Bragg Gaming a solid footprint into the United States market, because the acquired studio came with important clients onboard, such as BetMGM, Caesars, FanDuel and DraftKings.