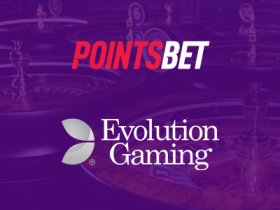 World’s leading provider of live dealer content Evolution Gaming has announced a partnership with premier global sportsbook PointsBet that is plotting to launch Live Casino services in the US online gambling market. The Australia-based operator is currently present in New Jersey, Indiana, and Iowa, offering both online and land-based sports betting.

Thrilled To Partner With Evolution

PointsBet debuted in the US market in July 2018 with a commercial license to operate as an online corporate bookmaker in New Jersey. The brand officially started to take wagers in the state in January 2019 and since that moment, it has managed to significantly expand the US coverage.

Aiming to strengthen its national footprint, the operator has penned numerous agreements across the states, which were subject to the passing of enabling legislation. PointsBet plans to go live with its ground-breaking live casino and iGaming options in New Jersey next year.

“We are thrilled to partner with Evolution Gaming to launch Live Casino technology in US jurisdictions, where we plan to offer our proprietary online casino platform. The

Operating in many regulated markets across the world, Evolution Gaming is constantly looking for new opportunities to extend its global presence. Since last year, the group has closely monitored the developments in Michigan, waiting for the state to join New Jersey and Pennsylvania and become the third regulated online gambling market in the USA.

While the first Evo’s US studio…

… in Atlantic City went live in August 2018, the state-of-the-art facility in Pennsylvania is supposed to be launched before the end of 2020. As for the Michigan production hub, it is scheduled to be open in 2021 providing that everything goes according to plan and the world is not going to face another global show-stopper. Due to well-known circumstances, the company had to temporarily close its studio in Tbilisi, which was re-opened two weeks later with a significantly reduced number of tables.

“Evolution’s Live Casino portfolio offers PointsBet a rich mix of world-leading online Live Casino games including classic table games, online Poker variants that are big favourites with US players, and our new generation of award-winning, record-breaking game show games. In addition, PointsBet will have the option of exclusively branded dedicated tables and environments, should they require these.”