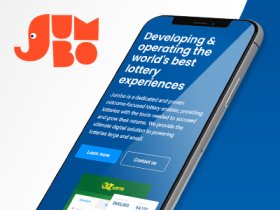 Jumbo Interactive, one of the largest digital retailers of national jackpot lotteries and charity lotteries in Australia, has announced its results for the 2022 fiscal year and the numbers show a significant increase in revenue.

In fact, the Australian company generated 104.3 million Australian dollars in revenue in the 2022 fiscal year, a figure which represents an increase of 25.1 percent over the results recorded in the 2021 financial year.

Revenue from retail lottery operations amounted to 91.1 million Australian dollars, which is 26.7 percent higher than the previous year. The good results in this segment were helped a lot by 43 big jackpots of over 15 million dollars that were available for Powerball and OzLotto.

The company’s software as a service (SaaS) business also recorded a revenue increase of 31.9 percent to a total of 42.7 million Australian dollars. That good result was largely due to an increase of 39 percent in the number of active players thanks to the long-term agreement signed with Western Australia’s Lotterywest at the end of 2020.

Focus On Mergers And Acquisitions

During the past year, Jumbo Interactive announced a series of acquisition deals that boosted the company’s profile and its global footprint. For example, the Australian company acquired Canada-based lottery management provider Stride Management for 11.7 million dollars, a deal that was completed in June 2022. .

Moreover, in January 2022 the company also agreed to acquire StarVale Group, an external lottery manager and digital payments business based in the United Kingdom. That deal was completed through Jumbo Interactive UK, a company that is entirely owned by Jumbo Interactive.

Mike Veverka, the founder and Chief Executive Officer of Jumbo Interactive, revealed that the company will continue to pursue opportunities for mergers and acquisitions in 2023. “The more active players we have on our platform, the more we can grow,” Mike Veverka added. “We see a substantial opportunity for Jumbo to grow in our priority markets of Australia, the UK and Canada.”