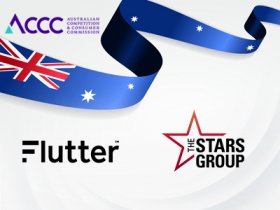 The epic merger proposed between Flutter Entertainment, the parent company of Paddy Power Betfair, and The Stars Group (TSG) has received approval from the Australian Competition and Consumer Commission (ACCC).

… last October Flutter came to an agreement to acquire all of the shares in TSG in order to establish with the PokerStars operator a combined business. The latter would have a diversified geographical distribution and an extensive range of products covering sports betting, poker, casino, fantasy sports, as well as free-to-play games.

The company pointed out that the deal would produce the largest online betting and gaming operator in the world. Arranged in that way, Flutter shareholders own approx. 54.64% of shares in the business, with TSG shareholders possessing 45.36%, the agreement sets up the entity with the estimated annual revenue of £3.8bn (€4.6bn/$4.9bn).

The merger of two industry giants was subject to various conditions including approvals from the FCA, London Stock Exchange, Euronext Dublin and green light from respective gaming control bodies in the UK, Ireland, Australia, the US, and Canada.

While the ACCC has already given its informal approval to the merger, Flutter and TSG are still waiting for the official go-ahead from the Australian Foreign Investment Review Board, as well as a number of international regulatory agencies, so as to proceed with the agreement.

At the beginning of February…

…the UK’s Competition and Markets Authority (CMA) made public its intention to investigate the Flutter-Stars deal, and invited any interested parties to provide comments until 18 February. The CMA commented that it’s going to consider if the merge will lead to a “substantial lessening of competition within any market or markets in the UK.”

Besides regulatory approval, Flutter and TSG also have to authorize the transaction and get votes of at least 66% of TSG shareholders to move forward. As things stand now, this is not likely to happen until the second quarter of the year. Both sides count on the completion of the deal during the second or third quarter of 2020 after gaining all required approvals.

Ontario-headquartered international leader in online and mobile gaming, The Stars Group operates in 22 jurisdictions including Australia. Entertaining millions of punters across the globe, TSG offers an array of betting products under both owned and licensed brands such as PokerStars, Full Tilt, Bet Stars, Sky Vegas, to name just a few.