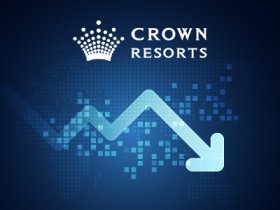 Crown Resorts, the biggest land-based casino operator in Australia, released its results for the first half of the 2020-2021 fiscal year and they show a significant decrease in revenue.

The company’s revenue went down by 62.1% compared to the same period of the previous fiscal year. In the six months ended 31 December, Crown Resorts had revenues of 581 million Australian dollars and recorded a loss of 120 million dollars.

The sharp drop in revenue was mainly due to the effects of the novel coronavirus pandemic. The operator had its Crown Melbourne venue closed for much of the second half of last year, while Crown Perth reopened in June 2020.

The Perth venue did give the company some hope, as chief financial officer Alan McGregor revealed the property had performed beyond expectations since its reopening.

“The main gaming floor started strongly, with performance moderating across the half,” the Chief Financial Officer said. “Non-gaming revenues were adversely impacted by capacity constraints and reduced foot traffic to the property, but have shown improvement through the half, particularly over the summer holiday season, despite the restrictions which remain in place.

Crown Melbourne has progressively recommenced operations from November, albeit with only limited initial access to the property. Since the easing of restrictions on 9 December, results had shown improvement but continued to be impacted by ongoing limitations on capacity.”

Crown Sydney, the company’s multi-billion dollar investment, opened for the first time in December 2020, but without gaming operations. Gambling is not yet allowed at this venue because of the inquiry into the operator’s licence. The results of that inquiry led to the resignation of the Chief Executive Officer last week.

More Trouble Ahead in Victoria

The inquiry in New South Wales has brought even more potential trouble for Crown Resorts, because now the authorities in the state of Victoria are determined to look into Crown Melbourne’s suitability to hold a casino licence.

Victoria state Premier Daniel Andrews announced the appointment of a royal commission that will look into the matter and help decide whether Crown Melbourne should be allowed to hold a licence to operate its casino and entertainment resort.

The commission will reveal its recommendations by 1 August 2021, and then the government will have to decide what to do next. “This is about making sure that those who hold a casino licence in Victoria uphold the highest standards of probity and integrity – and that they’re accountable for their actions,” the Premier said.