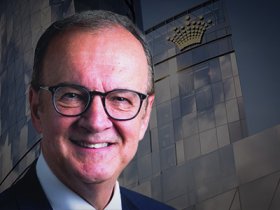 Crown Resorts, the biggest operator of land-based casinos in Australia, has announced that Dr. Ziggy Switkowski has received all necessary regulatory approvals and will become the new chairman of the company.

The intention to appoint Ziggy Switkowski as chairman of the Crown Resorts board was first made public in August, but the actual appointment needed to pass regulatory approvals before becoming effective. Switkowski was chosen to take over after Helen Coonan was forced to leave the job following the release of the Bergin report in February.

The new Crown Resorts chairman also holds the position of chancellor at RMIT University and he is also the chairman of NBN Corporation. Ziggy Switkowski is a very experienced corporate leader as he was previously chairman of Suncorp Group, the Australian Nuclear Science and Technology Organisation and Opera Australia.

Switkowski also covered the roles of chief executive and managing director of Telstra Corporation and Optus also served as a non-executive director of important Australian companies like Tabcorp, Healthscope, Oil Search, Lynas and Amcor. Jane Halton, who was interim chairman of Crown Resorts since August 26, will remain with the company as an independent non-executive director.

Shortly after the announcement regarding the new chairman, Crown Resorts revealed that it decided to reject the latest takeover bid from Blackstone Group, a powerful private equity firm from the United States of America.

Crown Resorts said it had considered the latest offer but in the end decided that it “does not represent compelling value for Crown shareholders.” However, the Australian company left the door open for a new proposal as it revealed it has offered Blackstone the opportunity to access non-public information to allow the American company to “formulate a revised proposal that adequately reflects the value of Crown.”

Crown Resorts also received interest from rival casino operator Star Entertainment Group regarding a merger, but the proposal was withdrawn in July as there didn’t seem to be much interest from Crown in advancing the deal.