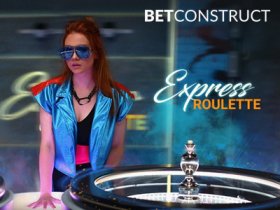 BetConstruct, the well-known international supplier of live dealer games for online casinos, has decided to boost its live casino portfolio with Express Roulette, a fast-paced live dealer game that should provide great entertainment.

The object of the game remains the same as in the widely known standard roulette, the player has to predict where the ball is going to land on the next spin of the roulette. The twist that BetConstruct added in their Express Roulette is that there will be two roulettes spinning at the same time, allowing operators to take double bets.

In case of corresponding results at the two tables, BetConstruct will offer a payout worth over 1,000 times the stake. This twist should attract more players to the game and increase the customer base for the supplier’s business clients.

Express Roulette also has an optional feature called “Favorite Bets”, which will give players the opportunity to create their own bet combinations and save them for future use in the game. There’s also an “Autoplay” button available in this game, which can be used to activate the automatic betting mode.

Last but not least, Express Roulette features a convenient “Bet History” board, where players can consult the results of all games played and maybe find new ideas for their bets based on past spin outcomes.

A few months ago, BetConstruct released a massive update for its business clients in the United Kingdom, adding no less than nine new live casino games to the offering for that region. The nine new live dealer games that got added to the company’s offering for its partners in the United Kingdom were Dragon Tiger, Live Keno, Bet-on Teen Patti, Casino Hold’em, Russian Poker, Switch BlackJack, Live Hi-Lo, Swift Roulette and Super Six Baccarat.

BetConstruct was founded in 2005 in London and since then it has grown into a powerful global company, which employs around 800 people in offices located in the United Kingdom, Armenia, Ukraine, Latvia, Malta, Latin America, France, Germany, Austria, Peru, Mexico, China, South Africa, and the United States of America.