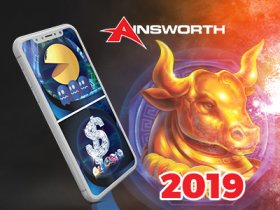 The financial update released by Ainsworth Game Technology (AGT) on Monday showed a significant loss of AU$4 million for the last half of 2019 (the first half of its fiscal 2020). Of even greater concern is the fact that this figure represents a sharp drop compared to AU$12.1 million reported profit for the same period a year earlier.

During all twelve months of 2019, Australia-based AGT struggled with problems, which were obvious already at the very beginning of the year. The company tried to reverse the situation desperately looking for an appropriate solution, but as time went by, things got worse seeing the third quarter with a 65.9% year-and-year decrease in profit.

What Was The Main Cause Of The Drop?

Well, the major reason for such a big revenue decline lies in the low level of international sales that dropped by 11% year over year to AU$87.8 million. Taking into consideration that 82% of AGT’s sales come from abroad, no wonder, the overall volume fell by 9% to $107.3 million as a consequence of the weaker performance.

Splitting the declines by region, North American sales dropped by 6% in comparison to the same period in 2018. When it comes to Latin America, the efficiency was somewhat weaker with a drop of 8%. In these two cases, the losses resulted from lower unit volume sales.

The situation was a bit different at home…

…where AGT saw the increase of unit sales by 2% yet the revenue was down 1% to AU$19.5 million. Quite naturally, this affected the EBITDA margin (a measure of a company’s operating profit as a percentage of its revenue), that was off by 55% for the six-month period with AU$14.6 million. On the bright side, it illustrates a loss per share of AU$0.01, which is far from the worst possible scenario.

AGT CEO Lawrence Levy doesn’t expect further deterioration as he and the rest of the team had already begun studying ways to improve performance. Commenting on the current state of affairs, Levy said:

“The transition is in progress to make AGT more profitable and efficient. We are re-evaluating R&D, increasing our game development resources, sharpening our sales and marketing focus and complementing organic growth with selective acquisitions. We are busy building the foundations and expect a return to profitability to deliver a positive net profit in the second half of FY20, with better results in FY21.”

Last November, already expecting a drop, AGT turned to Novomatic, which owns 52% of the company and hit a staggering record in revenue in 2018, trying to hide earnings slide through benefits of this strategic partnership. The idea also was to explore new options and extend operations to more markets.

Although this product is offered by Scientific Games, it incorporates Ainsworth’s proprietary HRM system and will be available at CDI’s Churchill Downs, Oak Grove, and Turfway Park HRM facilities scheduled to be open later this year.