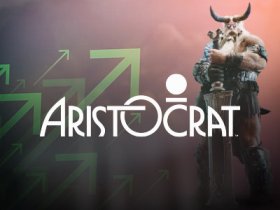 Aristocrat Leisure Limited, the Australian supplier of slot machines for land-based casinos and digital games for online casinos, has received appreciation and praise from analysts at J.P. Morgan, one of the most important global financial services companies.

The analysts regard Aristocrat Leisure Limited as the best pick in the Australian gaming industry at the moment as they expect the company to record a revenue increase of around 20 percent in 2022.

Moreover, the analysts at J.P. Morgan pointed out that Aristocrat has “a fast-growing digital division” while also continuing to deliver titles for land-based casinos. The analysis also noted that the Australian company “has been consistently gaining market share in North American gaming operations.”

In fact, earlier this year Aristocrat Leisure Limited announced the launch of a bespoke gambling floor for MGM Resorts in the United States. The new gambling floor hosts 50 themed slot machines and it is located inside the Beau Rivage Resort & Casino, which is owned and operated by MGM Resorts International in the American state of Mississippi.

Overall, the analysis published by J.P. Morgan announced that it expected “further digital growth” for Aristocrat, despite the Australian company having their takeover bid for Playtech rejected.

Strong Results In First Half Of Fiscal Year

In the first half of the 2021-2022 fiscal year, Aristocrat Leisure Limited recorded a revenue increase of 23.1 percent compared to the same period of the previous year, amounting to 2.75 billion Australian dollars. The biggest contributor to that increased revenue was Pixel United, Aristocrat’s social gaming division, which brought in 1.31 billion Australian dollars.

Aristocrat also reported that its costs of revenue increased 11.2 percent compared to the first half of the 2020-202 fiscal year, but the company was left with a gross profit of 1.53 billion dollars, up 35.3 percent year-on-year.

Overall, the company registered a pre-tax profit of 598 million dollars, a figure which represents an increase of 29.7 percent compared to the same period of the previous financial year.