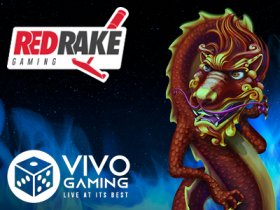 Vivo Gaming, one of the world’s most prominent providers of live dealer games for online casinos, has signed a new partnership with Red Rake Gaming, an innovative developer of casino games.

Vivo Gaming has been active in the live casino industry since 2010, but the company has also sought agreements with game developers in order to boost its offering to online casinos.

The addition of the top-performing games from Red Rake Gaming to Vivo Gaming’s portfolio has been an early success, the company reported that the games have seen positive adoption and performance, particularly across various regions in Asia.

Red Rake Gaming’s products come with the company’s world-class tournament tool, which attracts a great number of players and engagement across the portfolio. There is a progressive jackpot up for grabs, while players can keep track of their standing with the in-game leaderboard.

Red Rake Gaming has been on the market since 2016, and since then it has built a wide portfolio of top-performing games which have conquered multiple international markets including Belgium, Italy, Spain, Sweden, Portugal, Romania, Belarus, Malta, Colombia and the United Kingdom.

Vivo Gaming is a well-known name in the live casino games industry, the company has more than 60 live tables in operation across three continents, with around 150 business customers using its services. The live dealer games are streamed around the clock in Asian, Latin American and European styles.

The Israeli company offers a wide range of live casino titles, including baccarat, blackjack, roulette, poker and Dragon Tiger. The games are available in more than 27 languages and 178 currencies, even in several cryptocurrencies.

In addition to developing live dealer games, Vivo Gaming is also looking to build a strong third-party portfolio of games. Nadine Thys, Head of Account Management at Vivo Gaming, revealed that the company’s aim is to create “an unrivalled casino offering” with the help of its partners such as Red Rake Gaming.

On the other hand, Nick Barr, Managing Director at Red Rake Malta, declared that the Vivo Gaming has “enormous reach” and that should help his company’s “rapid market expansion”.