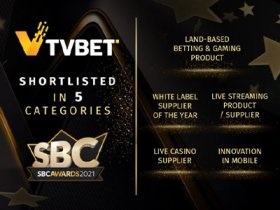 TVBET, the fast-growing international supplier of live dealer games and lotteries for online casinos, has announced it received further recognition for its work as it got shortlisted for five prizes at this year’s SBC Awards.

Getting nominated for prizes at SBC Awards is not a new thing for TVBET, the provider had this honour both in 2019 and 2020, but then it received just two nominations. Earlier this year, it also got shortlisted in four categories at the 2021 EGR B2B Awards.

This year TVBET will celebrate the company’s second anniversary on the global iGaming market. Even though it’s a relatively new player in this industry, TVBET has already managed to make a name for itself, gaining the trust of its business partners and the support of the players.

The supplier now has more than 200 partners which feature their live dealer games, and that’s probably the main reason why TVBET received the five nominations at the 2021 SBC Awards. The ceremony will take place on December 14 at Evolution London, with over 800 guests in attendance. The SBC Awards have been held each year since 2014.

In September, TVBET announced that it boosted its portfolio of live casino products to 15 titles with the launch of two new games: Andar Bahar and Mega 6. Both games feature three jackpots in addition to the usual winnings, making them even more exciting for players.

Andar Bahar is a very popular and ancient card game, with very simple rules and fast gameplay. The game has two sections, “Andar” and “Bahar”. The dealer starts by drawing a single card, the Joker. Then additional cards will then be drawn one by one and placed alternately in the “Andar” and “Bahar” sections of the table. The goal of the game is to find a card of the same value as the Joker that was drawn at the beginning.

Mega6 is a classic lottery game, in which 6 balls are drawn randomly from a total of 49. However, the players will also be able to bet on the color of the balls, some are white and the others are pink. Moreover, there are multiple other betting options available too: bet on the total for all the balls, on the exact sequence of numbers drawn, on the first number drawn, odd/even, color order of the balls drawn and so on.