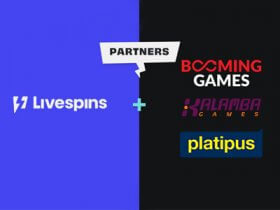 Livespins, the increasingly popular innovative live streaming gaming platform, has announced that its portfolio has grown significantly after having reached agreements with Booming Games, Kalamba Games and Platipus Gaming.

Livespins is an online gaming platform that features a lineup of the best streamers in the gaming market, people that are very popular among players from all over the world. Watching successful streamers is not everything, though, players can join the action at any time by betting along with the streamer.

That can create a group bet and a shared experience on a single game spin, but at the same time allowing each player to play according to their own preferences, by setting their own bet amount and number of spins. Moreover, players are able to chat with the streamer and with each other during the game. They can also enjoy adding reactions to what is happening across the reels.

After having reached an agreement with Kalamba Games, the Livespins platform became quite richer as the developer’s engaging and entertaining online slots for online casinos became available. Among the titles included we can mention great hits such as Blazing Bill Cash Quest – Next Release, Mochina Megaways and Joker Max.

Andrew Crosby, Chief Commercial Officer at Kalamba Games, admitted that streaming is becoming increasingly popular among players and added that Livespins is an innovative platform because it allows players to bet behind what is happening on the reels.

One day earlier, Livespins announced that it reached a similar agreement with Platipus Gaming, a leading developer of eye-catching HTML5 slots and table games. The studio’s games are quite popular at crypto casinos and now some of their best titles will be available for streaming on Livespins, including Wild Spin, Joker Chase and 7& Hot Fruits.

Vladyslav Garanko, Chief Marketing Officer at Platipus Gaming, expressed his belief that “streaming is absolutely the future of online casino” and added that the partnership with Livespins allows its studio to tap into this market with great potential.

Frederik Niehusen, Chief Commercial Officer at Booming Games, said that “Livespins is changing the way players experience online casino” and declared himself pleased that his company is taking part in this “revolution”.

“Livespins welcomes Booming Games to its platform“. European Gaming. May 30, 2022.