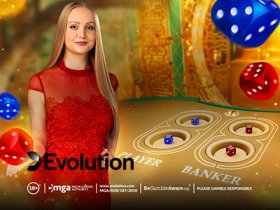 Evolution, the world’s most powerful provider of live dealer games for online casinos, has announced the addition of a brand new title to its live casino portfolio: Bac Bo, a unique game based on Baccarat.

Bac Bo is basically a simplified version of Baccarat, and it is played with dice instead of playing cards. In Bac Bo, the Banker score and the Player score are made up of the sum of two dice. There are four shakers in total, two for each hand, which automatically shake the dice.

Both the Banker and the Player get to roll their pair of dice, and then the resulting two numbers are added together. The winner is the one who gets the highest two-dice total. If the totals are the same then the rounds ends in a Tie, and such an event offers huge payouts, up to 88 to 1.

Speaking about this new game, Todd Haushalter, Chief Product Officer at Evolution, described it as “another unique creation” from the company’s product team and developers.

In fact, Haushalter revealed that the game blends elements from Baccarat and Sic Bo, creating an entirely new live casino title. Todd Haushalter added that Bac Bo should be a lot easier to understand than Baccarat, because it has simpler rules and gameplay.

The launch of Bac Bo is just the most recent in a series of new product launches from Evolution. In fact, the live casino giant seems to come up with new titles on a regular basis.

For example, in September 2021 Evolution launched Fan Tan, a live casino title that is based on a traditional Asian bead game. Fan Tan appeared in China and its origins date all the way back to the first century. The game is quite similar to the classic roulette, because its outcome is based on pure chance.

Fan Tan was among the most popular games played in the casinos of Macau. The game is based on the repeated division of beads. In Evolution’s live casino version, the player will initially see the beads covered by a glass dome. Then the dealer will use a metal cup called “tan koi” to separate out a random number of beads. After that phase is done, the dealer will proceed to sort the selected beads into lines of four, using a specially designed bamboo stick.

That process continues until a final line of beads remains. The players will have to predict the number of beads that remain in that final line, and that decides the outcome of the game.