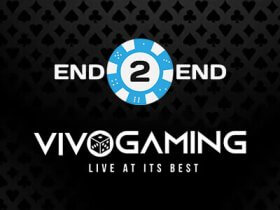 Vivo Gaming, one of the world’s most famous suppliers of live dealer games for online casinos, has announced that it signed a partnership with END 2 END, a company which specializes in bingo games.

In fact, END 2 END has been developing innovative bingo platforms for the past sixteen years and at the moment the company is offering world-class multiplayer bingo technology for both online and offline bingo games.

END 2 END has offices both in Argentina and the United States of America but it has a global reach, especially since having received a supplier license from the United Kingdom Gambling Commission in 2021.

The two companies decided to work together in order to bring live bingo to the global audience, boosted by the Chroma Key innovation developed by Vivo Gaming and employed on their live casino titles. Chroma Key replaces the solid background in the live casino studio, offering the opportunity to change the background to pretty much anything the imagination can create.

Vivo Gaming is an Israeli game developer which started its activity in 2010. Since then, the company gradually expanded all around the world, now it has offices in London, Manila, Buenos Aires, Miami and Costa Rica and it has also set up a live casino studio in the Philippines.

Speaking about the partnership with END 2 END, Neil Howells, Chief Commercial Officer at Vivo Gaming, acknowledged that the move represents a further boost to his company’s presence in the Latin American market.

Moreover, Neil Howells stated that the continent represents “a strategically important region for Vivo Gaming.” That is why the supplier sought an opportunity to deliver bingo games to an audience that loves them and in partnership with a developer that can bring “unparalleled multiplayer bingo experience” to the table.

Alejandro Revich, Chief Executive Officer and founder of END 2 END, declared himself delighted after having signed the partnership with Vivo Gaming, a company which he described as “one of the most sophisticated live-casino providers.”