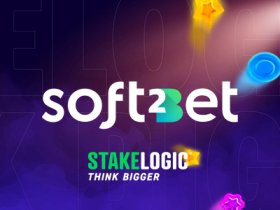 Under the terms of the agreement, the whole portfolio of slots and live casino titles developed by Stakelogic will be integrated into the offering of the online casinos operated by Soft2Bet. The list includes well-known brands such as Yoyo Casino and Campo Bet, along with up-and-coming websites such as Betinia and Boka Casino.

Stakelogic is a well-known brand in the world of slot games, while its live casino venture, Stakelogic Live, is relatively new. However, Stakelogic Live has already launched several titles and has a portfolio of more than seven live dealer games, including blackjack,roulette, auto-roulette and money wheel game shows.

Stakelogic started publishing video slots for online casinos back in 2016, and since then it has become one of the best slot developers in the industry. The launch of Stakelogic Live, the company’s live casino division, was first announced in June 2021, when the developer unveiled its brand new live casino studio based in Birkirkara, Malta. The studio features all the latest technologies, including high-definition cameras and the most advanced streaming technologies.

At the start of 2022, Stakelogic Live announced that its live casino products received ISO 27001 accreditation, an international seal of approval that gives players the certainty of a fair outcome.

Then, in March 2022, Stakelogic announced that it had appointed Richard Walker as the leader of the live casino division, an executive with great experience in the live casino industry after having previously worked for world-class providers such as Evolution and Pragmatic Play.

Seaking about the agreement with Stakelogic, Daniel Mitton, Director of Gaming at Soft2Bet, expressed his belief that the provider brings an “exciting product offering” to the table, while the new live casino products developed by Stakelogic Live are “breathtaking”.

Danila Dzehs, Sales Manager at Stakelogic, added that Soft2Bet is the ideal partner for the developer because it “combines a state-of-the-art platform with a network of prestigious brands that target regulated markets around the world.”

Moreover, Danila Dzehz revealed that her company is confident that the partnership will allow Stakelogic to expand its player reach and achieve “tremendous success” in the coming years.