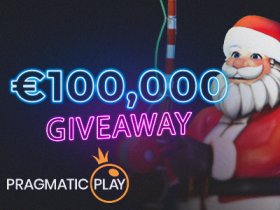 Pragmatic Play, one of the world’s most prominent providers of video slots and live dealer games, has announced that it will give away 100,000 euros in a tournament that was set up exclusively for the employees of its business partners.

The “Christmas Operator Tournament” will run until the 19th of December and it will be free-to-play. However, only the employees of the supplier’s online casino partners will be allowed to participate and compete for one of the 100 cash prizes.

The total prize money will be 100,000 euros, making this probably the largest tournament of this kind. Participants in this tournament will get the chance to play Christmas Big Bass Bonanza, and their winnings will translate into points on the tournament leaderboard.

The player that will be at the top of the rankings at the end of the tournament will get a pretty big Christmas gift, a cash prize of 50,000 euros! However, the following 99 players in the leaderboard will also get a share of the remaining cash, so there will be plenty of happy employees at the end of this period.

The registration for the Christmas Operator Tournament is a pretty simple process, and the entire flow of the event is also quite smooth, proving that Pragmatic Play has put in quite a bit of effort in order to make its clients extra happy.

The Christmas Operator Tournament is not the first event of this kind that the supplier has set up, Pragmatic Play runs such free-to-play tournaments throughout the year. In 2021 the developer has already given away 130,000 euros in prizes to the employees of its operator partners.

Yossi Barzely, the Chief Business Development Officer of Pragmatic Play, underlined that the company takes pride in organizing such events for its partners and added that they “hope this giveaway can bring some festive cheer to the employees of our valued partners.”

In addition to these Social Tournaments, Pragmatic Play has also set up the player-focused “Drops and Wins” promotion, where no less than 1 million euros are given away each month. Such massive promotions surely help the supplier’s operator partners attract more customers and bring more engagement.

Pragmatic Play currently produces around five new slot games each month but it is also very active in the live casino segment. The company also offers content in the virtual sports niche and it develops bingo games as well.