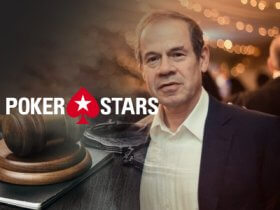 Isai Scheinberg admitted to running an illegal online gambling business, which means that the founder of PokerStars could spend up to five years in prison.

Scheinberg, 73, holds dual nationality of Canada and Israel. Last June, he was arrested in Switzerland and brought to the U.S. this January after dropping an extradition challenge.

Nine years earlier, in March 2011, in total eleven executives of PokerStars, Full Tilt Poker, and Absolute Poker were indicted by Federal Authorities for violating the Unlawful Internet Gaming Enforcement Act (UIGEA) adopted in 2006 by receiving funds from US customers, as well as for bank fraud, money laundering, and illegal gambling.

All principles except Scheinberg have pleaded guilty and been sentenced, some of them to fines, some to jail time. The date for Scheinberg’s sentencing is yet to be set and judge Lewis Kaplan is in charge of determining the punishment.

… in order to settle the charges with the Justice Department with no admission of guilt. While $547m went to the US state treasury, another $184m was paid as reparation to Full Tilt Poker players for damage caused by the operator’s collapse.

Under that deal, Scheinberg was barred from serving in a managerial or directorial function for the business, therefore his son Mark took the lead. In 2013 Mark Scheinberg said yes to pay extra $50m to the Department of Justice in exchange to be free from any future claims related to the Black Friday indictments.

The Rule Of Law

Commenting on the case, Geoffrey Berman, US Attorney for the Southern District of New York, said:

“Ten years ago, this office charged 11 defendants who operated, or provided fraudulent payment processing services to, three of the largest online poker companies then operating in the United States – PokerStars, Full Tilt Poker, and Absolute Poker – with operating illegal gambling businesses and other crimes“.

“As Isai Scheinberg’s guilty plea today shows, the passage of time will not undermine this office’s commitment to holding accountable individuals who violate US law.”

He also expressed gratitude to the Federal Bureau of Investigation and Homeland Security Investigations for their assistance in the investigation and prosecution. In addition to that, Berman thanked the Swiss authorities, as well as the Department of Justice Criminal Division’s Office of International Affairs for their help with the arrest and extradition.

In June 2014, Rational Group, then the parent company of PokerStars was bought by Amaya Gaming Group for $4.9bn. Renamed the Stars Group, the enterprise came in the limelight last October following its merger with Flutter Entertainment, Paddy Power and Betfair operator.