PointsBet Signs Partnership With Evolution For Live Casino In Michigan 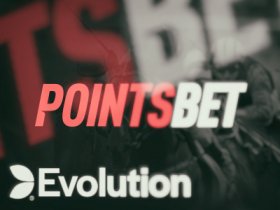 Evolution, the world’s biggest supplier of live dealer games for both online and land-based casinos, has announced it signed a partnership with PointsBet to bring live casino action to the U.S. state of Michigan.

The iGaming platform that was launched as a result of this partnership includes the most popular live casino titles from Evolution, such as Blackjack, European Roulette, Auto Roulette and Baccarat.

Evolution is the current market leader in the field of live casino games, providing its content across the globe. The supplier streams its live dealer games from studios located within state jurisdictions, offering a realistic gaming experience thanks to its professional dealers and quality content.

PointsBet started out in Australia and entered the United States market in 2019, expanding to more and more states since then. Along with Michigan, PointsBet currently operates in Canada, Illinois, Indiana, Iowa, New Jersey and West Virginia, while it is expecting approval to start its operations in Maryland and New York.

The main product provided by PointsBet was their online sportsbook, but now they have also developed an online casino which had its offering boosted by the addition of live casino content from Evolution.

Aaron O’Sullivan, VicePresident of Online Casino Revenue at PointsBet, declared that his company was eager to add these titles to their offering, as online casino products in general and live dealer games in particular have seen impressive growth in the United States lately.

Manjit Gombra Singh, President of Product and Technology at PointsBet, added that the addition of live casino titles from Evolution to the Michigan online casino will make its offering “serve as a template” as the company is looking to expand to other jurisdictions in the United States and also to Canada.

Evolution started their presence in the state of Michigan in July, when the supplier received approval from the local Michigan Gaming Control Board to set up their live casino studio. The purpose-built facility was Evolution’s eleventh studio worldwide.

The Michigan studio broadcasted blackjack, baccarat and roulette during the first few months, but then expanded its offering with other live dealer games and game shows from Evolution’s rich portfolio.