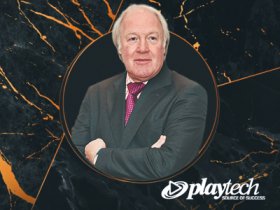 Playtech, one of the most important providers of video slots and live dealer games for online casinos, has appointed Brian Mattingley as its new non-executive chairman, with the appointment becoming effective on the 1st of June.

The new chairman will replace Claire Milne, who has served as interim chairman from April 2020, after Alan Jackson announced he would not seek another term at the head of the company’s board.

Brian Mattingley has previously served as non-executive chairman of 888, one of the world’s biggest online betting and gaming companies. He held that position since 2016, but in September 2020 he announced his intention to step down in the coming months.

Before becoming a chairman, Mattingley was a director at 888 since 2005 and then was promoted as chief executive in 2012. In 2019, when he was re-elected as chairman for a second term, he faced some opposition from a group of shareholders who questioned the length of time spent on the board.

The new Playtech chairman has also worked for Gala Group, Ritz Bingo, Kingfisher Plc and Dee Corporation. He was the chief executive officer of Gala Regional Development when that company was acquired by Ladbrokes.

Claire Milne, Playtech’s interim chairman, said the company wanted an experienced individual for the position, and Mattingley surely fits the bill as he was in the industry for the past 30 years.

Playtech revealed that Mattingley will be paid 338,000 pounds per year, almost 600,000 Canadian dollars. Lord Jon Mendelsohn, a former director of general election resources for the Labour Party, will replace him as chairman at 888.

Strong Partnership Between Playtech and 888

Just a few weeks before this announcement, these two companies reached an important business agreement, which saw Playtech set up a bespoke 888 branded studio in its Live Casino in Riga, Latvia.

The studio with the 888 brand features a wide range of live casino games and exclusive content from Playtech. The provider set up most of its popular live dealer games in the 888-branded studio, including Live Slots, Spin a Win and the newly-launched Adventures Beyond Wonderland.