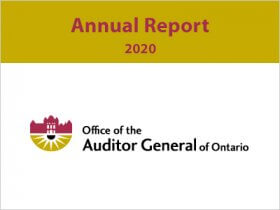 The Ontario Auditor General issued a warning regarding the province’s plan to liberalize online gambling, as the annual report claims the government isn’t doing enough to crack down on suspected money laundering through casinos.

This week, the Auditor General of Ontario released its 2020 Annual Report, which underlines that the Alcohol and Gaming Commission of Ontario (AGCO), the government body that oversees the province’s alcohol, gaming, horse-race betting and cannabis retail operations, “lacks operational transparency on its financial and regulatory activities.”

Bonnie Lysyk, the province’s Auditor General, exposed some details regarding her concerns related to money laundering: the number of suspicious transaction reports at Ontario casinos went up by 19% between 2017 and 2019, but the value of these dubious transactions doubled over the same period to 340 million Canadian dollars.

Moreover, despite provincial police being physically present in casinos to oversee integrity and investigate any suspicious activity, the AGCO only managed to seize cash from illegal transactions only four times in three years. Between 2017 and 2019, The Alcohol and Gaming Commission of Ontario banned just 38 people from casinos in the province.

The Ontario Auditor General also noted that the AGCO “had identified money laundering as a major risk in casinos and recognized it had gaps in its regulatory processes but it had not developed a plan to address those gaps.”

According to Bonnie Lysyk, in February the AGCO identified 686 electronic gaming machines in Ontario casinos that were not connected to the gaming management system employed by the Ontario Lottery & Gaming Corporation (OLG), the state-owned company that has a monopoly on gambling in the province.

In November, the provincial government in Ontario announced its plans to introduce new legislation to end the online gambling monopoly in Canada’s largest province.

The new legislation was supposed to open the market to private operators, while the state was set to benefit from increased revenues from licensing fees and taxes. The Ontario Lottery and Gaming Corporation (OLGC) is the only operator that can offer online gambling in the province, through its PlayOGA.ca website.

Under the terms of the plan, the Alcohol and Gaming Commission of Ontario (AGCO) would be in charge of overseeing and regulating iGaming in the province and also manage the relationship between the government and private operators.

The Auditor General expressed serious concerns regarding the liberalization plan, noting that the AGCO “would have both regulatory responsibilities and operational/revenue-generating responsibilities through its subsidiary, which could be perceived as a conflict of interest.”