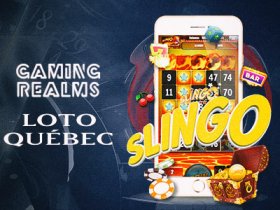 Loto-Québec, the provincial lottery and gambling operator headquartered in Montreal, has announced that it signed a new partnership with Gaming Realms, an innovative provider of iGaming content.

Gaming Realms announced the partnership with Loto-Québec in a statement which detailed that the company’s Slingo Original games will be going live in the Canadian province which has a population of 8.5 million people.

Loto-Québec is owned by the state and is the only regulated operator of gambling activities in the province of Quebec. The corporation was founded all the way back in 1969 by the Québec Government, aiming to provide lottery games for customers in Canada’s French-speaking province. The company has constantly developed and now it also offers online casino entertainment to its customers.

The first games from Gaming Realms that will be added to the Loto-Québec offering will be Slingo Extreme and Blackjack Exchange titles, with the rest of the provider’s portfolio of casino games to follow in the near future.

Mark Segal, the Chief Financial Officer of Gaming Realms, pointed out that this deal comes shortly after the provider was granted a license to operate in Ontario as the province’s market opened to private operators.

The company’s Chief Financial Officer added that he expects 2022 to be “an exciting time” for Gaming Realms as it aims to establish a strong presence in the Canadian market. In fact, the company’s long-term goal is to expand further into the whole North American market. Slingo had already been present as a brand in Quebec through the Slingo branded scratch cards, which sell by the millions every year.

Stéphane Martel, Head of Products and Innovation at Loto-Québec added: “Gaming Realms’ games are a great addition to our growing online casino game portfolio. Our players will enjoy this new offer.”

Shortly before the announcement regarding the deal with Gaming Realms, Loto-Québec revealed that it signed a partnership with Red Tiger, one of the most prominent suppliers of slot games for online casinos.