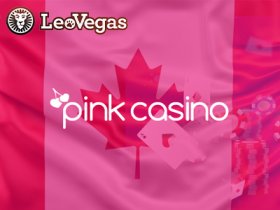 LeoVegas, a gaming group that operates several successful international online casinos, has announced its intention to make their Pink Casino brand available to players in Canada.

The group is already present on the Canadian market through some of its brands, and that can only help them make Pink Casino a success in North America. This launch is part of their strategy of expansion, which has been in action over the past few months.

Earlier this year, LeoVegas launched a new brand dedicated exclusively to live dealer games, and that website is open to Canadian players as well. Since May, players from all over the world were able to enjoy a wide range of blackjack, roulette, baccarat, poker, and other games streamed by the world’s top providers of live casino software and content.

Among the providers for livecasino.com we can find all the major players in this industry: Evolution, Ezugi, NetEnt, Pragmatic Play and Authentic Gaming.

Looking for Profits and Growth

Launching an already established brand into a new market is part of a strategy that LeoVegas has been deploying, in an attempt to get the most out of what they already have.

About this strategy, Gustaf Hagman, Chief Executive of LeoVegas, said: “It is super exciting to continue expanding in North America. This is a superb way to use our strong brands and deliver profitable growth. I look forward to offering the Canadian market even more gaming fun and entertainment in the form of Pink Casino.”

This move was made possible by a measure that the group took earlier this year, migrating twelve of its online gambling brands to its proprietary gaming platform. That gave the operator increased control over its technology, and also reduced costs by decreasing the complexity of daily operations.

LeoVegas is mainly active on the European market, but other parts of the world are becoming more and more profitable and attractive for them. Canada, for instance, is included in the company’s “Rest of the World” reporting segment, which gave the group 18 percent of its total revenue in 2020.

The Year Ends with An Award

The announcement of the launch of Pink Casino in Canada came just a few days after the online casino was named “Operator of the Year” at the 2020 SBC Awards.

After accepting the award, Matthew Jakes, Casino Portfolio Specialist at LeoVegas said: “It is fantastic to receive this award, not just because everybody wants the prestige of being operator of the year, but it is really showing how much work we have, as a collective as Team Leo, put in during what has been an exceptional year.

Our commitment to innovation and providing the greatest and safest gaming experience for our players is something we are very much proud of. It seems a long time ago that we brought our own Branded Megaways and Multiplay to life and most recently it is the massive appeal of LeoJackpot, we really enjoy being King of Casino and we equally appreciate such recognition today.”