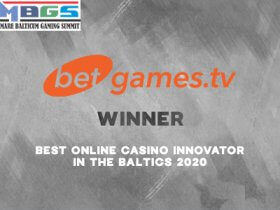 BetGames.TV, a top-tier Live Dealer betting products supplier, has won the title of Best Online Casino Innovator in the Baltics 2020 at the Baltic and Scandinavian Gaming Awards (BSG Awards).

Held in Tallinn, Estonia within a framework of the third edition of MARE BALTICUM Gaming Summit, this year’s event gathered the most prominent industry players across the Baltics and Nordic regions, with Evolution Gaming and NetEnt among the participants.

BetGames.TV was deservedly rewarded for its innovative approach to the idea of live entertainment, all the more so, the company’s games become more and more popular among punters.

During the current year, the brand has signed numerous strategic partnerships including deals with Amelco and SBTech while BetGame.TV’s products have stunned with top performances. In April, the company reported a 600%+ spike on bet counts and above 200% on online player counts, which followed the cancellation of live sports.

As for the judging period alone, the company’s total average daily bets surged by 37% globally, with bet counts tripling in LatAm and up by almost 40% in Europe.

“We’re absolutely delighted to have scooped the award for Best Online Casino Innovator at the first-ever BSG Awards. The win is a true testament to the dedication and attention to detail of our team and is a great reward for the hard work we put in to stay at the forefront of technical development.

“This year has been one of rapid growth here at BetGames.TV, and with good reason. We use our expertise to design cutting-edge games which push the envelope and become instant favorites with both our players and partners. We’re absolutely delighted to see it recognized by our industry peers.”

Other Winners Of BSG Awards

MARE BALTICUM Gaming Summit is the leading boutique style gambling industry conference of the Baltic and Scandinavian region. 2020 BSG Awards took place on August 6, the winners were decided by a final vote submitted by the attending participants.

In addition to that, popular among online casino players Trustly was recognized as Best Payment Service Provider in the Nordics. In its turn, globally renowned Gaming Laboratories International (GLI) was voted Best Testing laboratory in the Nordics.