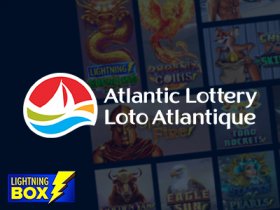 The Atlantic Lottery Corporation, the Canadian organization that operates lottery games in Atlantic Canada, has announced it signed an agreement with Lightning Box, an innovative slots provider from Australia.

This isn’t the first time the Australian company gets involved in the Canadian gambling market. In fact, Lightning Box has signed similar agreements with Loto-Quebec in 2019 and with the British Columbia Lottery Corporation in 2020.

The first game that will go live after the Atlantic Lottery Corporation deal is Silver Lion, a video slot with five reels and 1,024 ways to win. The slot has an African theme, with symbols ranging from meerkats to Masai warriors, while the silver lion is the star of the product.

Another Step in North American Expansion

Peter Causley, the Chief Executive Officer and co-founder of Lightning Box, said that the deal with the Atlantic Lottery Corporation is an important step for the Australian company and its plans to expand the business in the North American market.

Moreover, the Lightning Box CEO added that he is fully confident that Silver Lion will become very popular with Atlantic Lottery’s customers because it has done very well in various territories around the world. Lightning Box was founded in 2004 and has launched several video slot titles since then, which are now included in the portfolio of various online casino operators.

The company is well-known for its appetite for innovation. In 1988, it became the first lottery organization in the world to print a barcode on all draw and scratch tickets, which allowed prizes to be verified instantly.

Then, in 1990, the ALC introduced the first legal video lottery terminals in Canada and in 2004 it launched PlaySphere, a platform that allowed players to enjoy lottery games online. The Atlantic Lottery Corporation has developed and it now operates online casinos for three provinces: Prince Edward Island, Nova Scotia and New Brunswick.