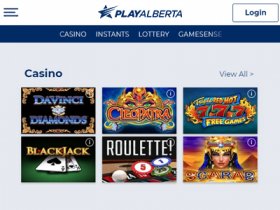 The Alberta Gaming, Liquor and Cannabis Commission (AGLC) has announced the launch of the first legal online casino in the province: PlayAlberta.ca, powered by software provided by NeoPollard.

The website includes a wide range of video slots and table games, along with British Columbia Lottery Corporation’s GameSense, which helps customers with support and advice on sustainable play.

The players can also set betting limits and time limits for their activity on the website, helping them keep their gambling responsible.

Alberta already has a pretty substantial network of brick and mortar casinos, and the appearance of the online platform should not disrupt their business. That is why the AGLC has set up an online gambling advisory committee consisting of representatives from Alberta’s gaming industry.

That committee will make sure that the PlayAlberta online casino will complement the services of the land-based venues. The online platform is accessible from all sorts of devices, from desktop computers to mobile phones and tablets.

The Alberta Gaming, Liquor and Cannabis Commission was hoping to launch the online gaming platform sometime in 2021, at least that was their intention when they published a request for proposals for a technology partner back in January.

In June, the AGLC selected experienced company NeoPollard as their technology partner, and just three months later the partnership produced its fruits as the PlayAlberta platform was launched.

The AGLC is mandated by the government to ensure the province’s gaming industry is managed well so it can provide the biggest benefits possible to Albertans. In 2018-19, over $1.4 billion in net gaming income was generated for the General Revenue Fund. That money was then used to support government programs and services for the citizens.

This event leaves Saskatchewan as the only province in Canada which does not yet offer some form of online gaming.