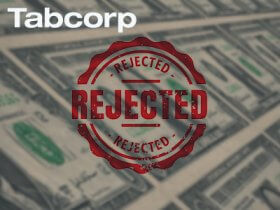 Tabcorp, the Australian lottery and betting operator, has announced that the various offers of around 3 billion dollars for its wagering and media division have all been rejected.

The latest of those bids was received from Fox Corporation, the famous U.S. media business owned by the Murdoch family. The powerful company, which is currently led by billionaire Lachlan Murdoch, has serious plans of moving into the Australian betting market after registering the FOXBet trademark in the country in October 2020.

Tabcorp also received similar offers from Entain, the British company that owns Ladbrokes, and from Apollo Global Management Incorporated, a wealthy private equity group that is trying to acquire various gambling businesses at the moment.

Tabcorp as a whole is valued at 10 billion dollars. The company said it is waiting for improved offers for its “Wagering & Media” division, which controls around 44% of the local sports betting and racing market.

Steven Gregg, the Australian company’s chairman, added that “certainty” is also a factor when it comes to dealing with the takeover bids, but also insisted that the offers of 3 billion dollars were “well under what the business is worth.” According to market sources, Tabcorp would be willing to sell the wagering and media division for 3.5 billion Australian dollars.

Despite Tabcorp’s public refusal of their offer, Entain has released a statement saying that the British company is still “confident an acquisition of the business represents the most attractive pathway to value realisation for investors and that its business is a clear and obvious choice as a strong, long-term partner for Australian racing.”

Meanwhile, Tabcorp has announced that they will stop their search for a new chairman for now and that they will launch a “strategic review” of the business in order to find out which is the best way forward.