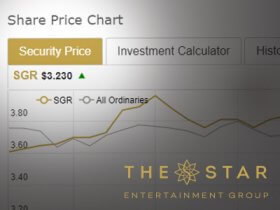 Star Entertainment Group, one of the biggest casino operators in Australia, has recorded a big drop in the value of its stocks on Friday, going down to the lowest level in seventeen months.

The sharp decrease was the result of evidence given at an inquiry into the group’s activity at its Sydney casino. The revelations that came out of the public hearing on Friday sent the stock tumbling seven percent to 3.215 Australian dollars, the lowest figure since October 2020. The decrease cut the company’s market value to 3 billion Australia dollars.

The company is currently under investigation in Sydney as the local regulator is trying to determine whether The Star is suitable to continue holding a license to run its flagship casino in the city.

If that information is confirmed by the proof that the investigators are trying to uncover, then the company will face accusations of fraud. The inquiry was launched by the New South Wales Independent Liquor & Gaming Authority in September 2021 after concerns were raised about the operator’s dealings with junkets and failings regarding money laundering prevention measures.

Top Executives In The Crosshairs

So far the inquiry has found details about the involvement of Harry Theodore, the company’s Chief Financial Officer, and Oliver White, the General Counsel at Star Entertainment. Both executives were alleged to have misled National Australia Bank (NAB) and China UnionPay over transactions made at the company’s casinos in 2019.

It seems that payments were accepted from UnionPay bank cards at a number of the operator’s partner hotels and then transferred to the casinos that Star Entertainment owns and operates inSydney and Brisbane.

That procedure leaves the company wide open to money laundering, allowing its customers to avoid the capital controls that the Chinese government imposes. Moreover, such dealings break the company’s agreement with NAB, the famous Australian merchant bank.

The public hearings will continue and specialists are concerned that Star Entertainment might face a similar fate as Crown Resorts, the rival operator that was found guilty of several breaches in New South Wales last year. Since then, Crown Resorts has been subject to strict regulatory limitations and oversight.