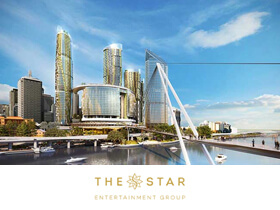 Star Entertainment Group, one of the biggest hotel and casino operators in Australia, has revealed that the average spend of its visitors has been substantially higher recently.

The announcement was made by John O’Neill, the Chief Executive Officer of Star Entertainment. “The people who are visiting our three premises at Brisbane, Gold Coast and Sydney are spending more money,” O’Neill said during a networking lunch in Brisbane, where the company is developing an integrated resort called Queen’s Wharf Brisbane. The investment is worth 3.6 billion Australian dollars.

“The average spend is up substantially,” the Chief Executive Officer added. “There’s maybe a gap between the haves and the have-nots, but the disposable income of those going out is substantially up.”

The Star Entertainment executive also added that Australia should consider a new approach to international marketing in order to bring back foreign visitors and boost its tourism industry. O’Neill insisted that the country should promote more than its beaches, food and wine, and focus instead on the strong safety record.

“The borders will be open and this is a great place to visit,” the CEO said. “You’re not going to get mugged walking down the streets of Brisbane, it’s safe and secure. It’s such a good story, we just have to try and tell it.”

Losses Recorded In First Half Of Fiscal Year

Despite the increased average spending from the visitors, Star Entertainment recorded losses of over 65 million Australian dollars in the first half of the 2021-2022 fiscal year.

The Australian casino operator was affected by closures and other restrictions imposed by the authorities in order to stop the spread of the novel coronavirus. For the six months to December 31 2021, Star Entertainment recorded a decrease of 22.1 percent in revenue to 577.1 million Australian dollars. In the similar period of the previous financial year, the company generated revenue of 741.4 million Australian dollars.

The company’s Sydney venue was closed from 26 June to 11 October, while its venues in Queensland were also closed for a short period during the last six months of 2021. Moreover, the operator’s international VIP business was also affected by international border closures and travel restrictions.