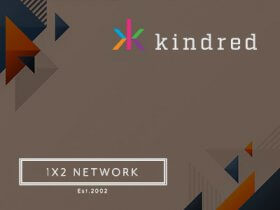 The Kindred Group has reached an agreement with 1X2 Network, the innovative video slots provider, to include their titles into the company’s multiple online casino brands.

1X2gaming and Iron Dog Studio are part of the 1X2 Network, which already has integrated its games through partnerships with several big online casino brands all around the world.

The Kindred Group, which has offices in Sydney and Darwin, operates several online casino and sports betting brands, including big names like Unibet and 32Red. They are licensed to operate online casinos in Australia as well, along with several other territories in Europe and the United States.

The integration of the new slots into Kindred’s casinos will be carried out through Relax Gaming’s Silver Bullet platform. The 1X2 Network released Pirate Kingdom Megaways during the last days of 2020, a promising video slot that was added to already popular items such as Battle Maidens, Rainbow Wilds and Blood Queen.

1X2gaming started out in 2003 in the United Kingdom and the company initially specialized in virtual football, fixed odds and casino games. Then, in 2017, the company announced its rebranding to 1X2 Network, which includes 1x2gaming, Iron Dog Studio, which is a slots development outfit, and strategic partners Leap Gaming and Probability Jones.

Last year the developer introduced its award-winning Branded Megaways concept, allowing operators to launch their own unique Megaways slots, carrying their own branding.

About this new partnership, Kevin Reid, Chief Commercial Officer at 1X2 Network, said: “Kindred Group operates some of the biggest online gambling and online casino brands in the world so we are delighted to see games from our studios added to its content offering.

Our games are all about delivering a thrilling player experience with lots of big win potential, and this is achieved through smart math and unique mechanics not found in other games. This allows operators that offer our content to stand out from their rivals.

Our games have proved to be incredibly popular with players in a wide range of regulated markets and we believe they will enjoy similar levels of success with Kindred’s discerning customers.”

David Robertson, Head of Casino at Kindred Group, added: “Kindred Group prides itself in offering our players the widest range of quality content. We’ve had our eye on 1X2 Network for some time, so were over the moon to hear they were integrating into the Relax Gaming network.

Their content is well loved by players and the industry alike, we’re therefore very excited to see what this new partnership can do. That the integration was carried out by Relax Gaming and via its Silver Bullet platform has ensured a smooth and seamless process and we look forward to adding more content from 1X2 Network over the coming months.”