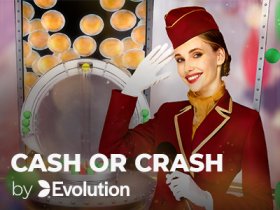 Evolution, the world’s most important provider of live casino software and content, has announced the release of a brand new title: Cash or Crash, a new live game show that should bring lots of entertainment to players all around the world.

The premise of the show is quite adventurous: players are taken on an augmented reality blimp ride up into the sky, flying over a bustling metropolis. The maximum prize is no less than 50,000 times the stake and Evolution also revealed that this game has a theoretical return to player of 99.6 percent. That figure makes it one of the most player-friendly games on the market.

Playing Cash or Crash requires some strategy from the players, along with the usual bit of luck. The game features sets of red and green balls, plus a special gold ball. Each round sees a single ball getting drawn, and if that ball is not red the player gets offered a sum of money.

Then the player has the opportunity to choose whether to take that money and cash out or take just half of it and keep going. There’s also the option of continuing and going for even bigger prizes, all the way up to 50,000 times the stake.

However, players must also be careful and cash out before a red ball is drawn, otherwise, the blimp crashes and all the prizes are gone. The gold ball can help, though, because it acts as a shield to protect players from the next red ball. The gold ball also increases payouts.

Todd Haushalter, Chief Product Officer at Evolution, described Cash or Crash as “not just a strategy game”, but as “a skill-based game” and also as “the most generous game players have ever seen”.

Todd Hausshalter also revealed that there are 20 green balls in the game, which are advancing players and giving them prizes, and just 8 red balls, which crash the blimp and end the game. Taking that into account, players have the chance to cash out with a profit 71% of the time on average.

At the beginning of July, Evolution completed the acquisition of the Australian company Big Time Gaming, one of the most innovative developers of video slots for online casinos.

Big Time Gaming is the company that created the famous Megaways mechanic, which has been featured in hundreds of video slots from the world’s biggest suppliers. The Australian company was established in 2011 in Sydney and its games are present in over 600 online casinos all over the world.

Evolution’s proposal to buy the slot developer was accepted by the shareholders in April 2021 and the deal is believed to be worth around 450 million euros, with part of it being paid in cash and the remainder being compensated with Evolution shares.