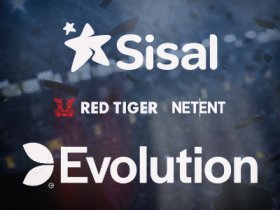 Evolution, the world’s most successful supplier of live dealer games for both online and land-based casinos, has announced it signed an agreement with Sisal, extending the existing partnership between the two companies.

The new deal will see Sisal include online slots and jackpots from NetEnt and Red Tiger, two of the most powerful brands in the portfolio of the Evolution Group. NetEnt was acquired by Evolution in December 2020, months after the acquisition of Red Tiger.

Now the slots from NetEnt and Red Tiger will be added to the offering at Sisal, both in the company’s online platforms and in its retail sites. The list of slots from NetEnt included in the deal features extremely popular names such as Starburst, Gonzo’s Quest, Divine Fortune and Twin Spin Megaways. Among the Red Tiger games the most prominent are Gonzo’s Quest Megaways, Dragon’s Fire Megaways, Piggy Riches Megaways and Dragon’s Luck Deluxe.

In addition to those slots, Sisal will also have access to Red Tiger’s Daily, Hourly and Super Drop Jackpots, along with the Smart Spins bonusing software and Tournaments gamification functionality.

Taking A Strong Relationship To The Next Level

Speaking about the new deal with Evolution, Marco Bedendo, Gaming Machines & Online Casino Managing Director at Sisal, said that the two companies already had a “strong relationship” but that the new agreement should take the operator’s slots offering “to the next level”.

James Jones, Head of Business Development at Evolution, confirmed that the two parties had been working together for a number of years and added that the slots and tools from NetEnt and Red Tiger should help Sisal develop its offering even further.

Evolution is the current market leader in the field of live casino games, providing its content across the globe. The supplier streams its live dealer games from studios located within state jurisdictions, offering a realistic gaming experience thanks to its professional dealers and quality content.

The Evolution Group also owns Ezugi, one of the most experienced providers of live dealer games, along with Red Tiger and NetEnt, two of the most recognizable brands in the online slots industry.