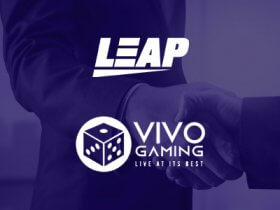 Vivo Gaming, an innovative company specializing in bringing the latest technologies into the iGaming industry, has announced a new content distribution agreement with Leap Gaming, a top-tier provider of 3D slots, table games, and virtual sports. Under the deal, the diverse Leap portfolio will be added to the Vivo’s ever-growing platform.

Leap Gaming is widely known for creating ultra-realistic games that amaze with crisp 3D graphics and premium animation. MGA licensed, they are deployable on multiple platforms, ensuring superb performances on any desktop or mobile device. The broad range of products covered by this brand includes a variety of popular casino classics, Virtual Sports Officialized content, and a host of state-of-the-art pokies packed with high volatility and exciting bonus features.

“State-of-the-art graphics and a lot of fun can be found in all the games provided by Leap and we are thrilled to share this unique experience with our customers and provide them with premium games”.

“Having our unique 3D games offering available across Vivo Gaming’s extensive footprint, reassures us that the need for immersive UX, quality and authentic content, is real. We look forward to a successful journey and a strong and lengthy partnership”.

Even though Vivo Gaming is known mainly as a developer of premium solutions for Live casino, its ground-breaking platform features an impressive assortment of games created by internationally renowned studios such as Betsoft, Tom Horn, Spinomenal, and Platipus Gaming. The agreement with Leap comes shortly after the partnership with Arrow’s Edge penned in May.

Speaking of the live casino vertical, the company recently launched a new studio in the Philippines, aiming to enhance its Asian presence. Called Vivo Galaxy, it is inspired by fascinating Asian culture and traditions and currently offers one European roulette and four baccarat live tables while more immersive titles are expected to be released later this year.

In addition to that…

…less than a month ago, Vivo launched a new dedicated studio as part of a major cooperation project with SA Gaming, the leading provider of live casino content in the world’s largest and most populous continent. SA Euro is located in Bulgaria and regulated by the Bulgarian State Commission on Gambling.

At the moment, the company boasts a comprehensive library of live dealer games including European and American roulette, blackjack, Caribbean Stud, baccarat, Dragon Tiger, sic bo, as well as recently revamped Casino Hold’em. All titles are streamed from the brand’s ultramodern facilities in Bulgaria, Uruguay, Philippines, and Georgia, as well as from the authentic atmosphere of luxurious Portomaso, Oracle, and Princess land-based casinos.