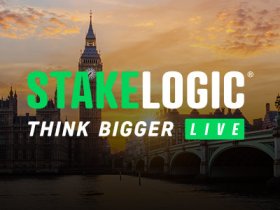 Stakelogic Live, the increasingly popular new developer of live dealer games for online casinos, has announced that its horizon has expanded after having received a supplier license from the United Kingdom Gambling Commission.

The provider of live casino content was already certified to operate both in Malta and the Netherlands and has managed to build a solid portfolio of live dealer games in a rather short period of time.

Stakelogic started publishing video slots for online casinos in 2016, and since then it has become one of the best developers in the iGaming industry. The launch of Stakelogic Live, the company’s live casino division, was first announced in June 2021, when the developer unveiled its world-class live casino studio based in Birkirkara, Malta. The studio features all the latest technologies, including high-definition cameras and the most advanced streaming technologies.

At the start of 2022, Stakelogic Live announced that its live casino products received ISO 27001 accreditation, an international seal of approval that gives players the certainty of a fair outcome. Then, in March 2022, Stakelogic announced that it had appointed Richard Walker as the head of the Stakelogic Live division, an executive with extensive experience in the live casino industry after having previously worked for top providers such as Evolution and Pragmatic Play.

The supplier has set up lavish backgrounds for its live casino titles, attempting to create an authentic casino experience for its players. Moreover, the games are hosted by highly trained dealers who know how to interact with players and make them feel like VIPs.

Stakelogic Live is also known for having brought forward a few innovative concepts in the live casino industry, including Super Stake. This feature turbo-charges the gameplay and was first introduced in video slots by Stakelogic. It allows players to double their bet in order to increase the chance of triggering a bonus feature.

Now that the UK license was received, the provider is free to roll out its live casino suite in this market. Speaking about this moment, Stephan van den Oetelaar, Chief Executive Officer of Stakelogic, described it as “a pivotal milestone” for the company as it attempts to become “the leading provider of live casino content to operators in regulated markets around the world.”