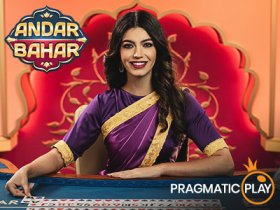 Both games will be broadcast from the company’s state-of-the-art studio located in Bucharest, Romania, featuring numerous 4K cameras and 24/7 availability. However, the background and decorations are designed to make players feel like they are in a land-based casino in India.

Roulette India combines the land-based feel with the unique interaction and accessibility of online play. It is the last product in a long series of localized roulette versions from Pragmatic Play, after Roulette Germany, Roulette Italy, Roulette Russia and Roulette Macao.

Andar Bahar is a very popular card game that is believed to have originated in Southern India a few centuries ago. The rules of the game are very simple and that is probably why Andar Bahar gained so much popularity all over the world.

The version released by Pragmatic Play is designed to deliver a familiar betting experience for fans of games such as Baccarat or Dragon Tiger. Moreover, the game also offers Poker-style side bets, such as a Straight Flush, adding even more excitement to an already entertaining experience.

Pragmatic Play has been expanding its global footprint along with its portfolio lately, mainly through partnerships with big online casino brands and distributors. One of those deals was struck with platform supplier Groove Gaming, making all the popular video slots from Pragmatic Play included in Groove Gaming’s offer.

The agreement is not limited to that, though, as the supplier’s offer was also enriched with a variety of live dealer games that were provided by Pragmatic Play. Groove’s extensive platform includes over 5,000 casino games from a wide range of providers, along with a huge selection of aggregated content which offers slots, online casino and live casino, poker and table games.

After the agreement with Pragmatic Play, that selection also included successful live dealer titles like Mega Sic Bo, Auto-Roulette and Live Baccarat, all broadcast by Pragmatic Play from their studios in Bucharest, Romania.