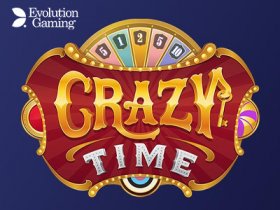 Get ready for new levels of interactive fun and excitement with Crazy Time, the latest addition to the Evolution’s Game Shows range. Chock full of bonus features and staggering multipliers, it’s likely to be the most entertaining pastime ever – both to play and to watch!

Game Where Players Have A Say

First came into the limelight at ICE London earlier this year, Crazy Time is a once-of-its-kind live game show based on Evo’s popular money wheel concept introduced in Dream Catcher. Set in a spacious vibrant studio, it works magic with the help of a Top Slot above the money wheel and the whole four bonus games: Cash Hunt, Pachinko, Coin Flip, and Crazy Time.

…as players just wager on numbers, this game is incredibly exciting at the same time due to the fact, their decisions do matter and influence the outcome, so they no longer always win the same prize. Interactive elements and state-of-the-art technology let players win different multipliers in two out of the four bonuses, providing an opportunity to hit up to25,000x bet!

In the base game, the Top Slot spins together with the main money wheel and serves to generate one random multiplier for one random bet spot – either a number or a bonus game. The moment a multiplier and a bet spot align horizontally in the Top Slot, there’s a match, meaning the multiplier will be added to this particular bet spot. Moving forward, it can either multiply a bet on a number or multiply the multipliers within a bonus game if the main wheel also stops at the same bet spot!

Needless to say, that all players are welcome to watch the engaging bonus games designed by Evolution but only those who have placed stakes on the corresponding bet spot can participate and win. Below are the details on how the four available extras work and why they’re worth a shot.

This feature takes players to the shooting gallery equipped with a large screen that has 108 random multipliers, each is covered by a random symbol. Each player needs to select the target where he/she believes the largest multiplier is hiding. The cannon will shoot at the target to reveal the multiplier won by each player.

Just as the name of this game says, the flip of a blue/red coin determines a winning multiplier. Two different multipliers are generated before the coin is automatically flipped, meaning one would apply in the case the red side is facing up, and another if the blue side is winning.

Popular in Japan Pachinko has found its way into Crazy Time featuring a large Pachinko wall with a plethora of physical pegs. The moment a game presenter drops a puck, it will show the multiplier won by players. If the puck lands on a DOUBLE value, all the multipliers at the bottom of the wall will be doubled while the puck will be dropped again – until a multiplier is won or until their value reaches the maximum of 10,000x!

What’s behind the secret red door? A crazy world with a gigantic virtual money wheel! Players can choose between the blue, green, or yellow flapper, and when the wheel comes to a stop, the player wins the respective multiplier. If a flapper points to a DOUBLE or TRIPLE value on the wheel, all the multipliers are doubled or tripled, and the wheel will spin again! The great thing is, the amazing wheel can be re-spun until the multipliers reach the upper limit of 20,000x!

Source: “Enjoy the Craziest Time ever, with multipliers in every round“. Evolution Gaming. June 2020.