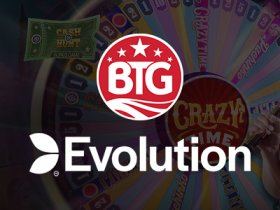 Evolution, the world’s biggest provider of live dealer games, has reached an agreement to buy Big Time Gaming, the Australian slot company that has developed the famous Megaways mechanic.

The deal is believed to be worth around 450 million euros, which will be paid both in cash and in Evolution shares. According to the Swedish company, the deal should be closed by the end of the second quarter of 2021.

Under the terms of the agreement, Evolution will have to pay 220 million euros up front and then make earn-out payments based on Big Time Gaming’s financial results for the upcoming two years. In 2020, the Australian company recorded earnings before interest, tax, depreciation and amortisation (EBITDA) of 29 million euros and revenue of 33 million euros.

These earn-out payments will be at most 230 million euros and will be paid to the Big Time Gaming shareholders in 2023 and 2024. The deal stipulates that 70 percent of these sums will be paid in cash while the other 30 percent will consist of newly issued Evolution shares.

As for the up-front payment, 80 million euros of it will be paid in cash, while the remaining 140 million will be paid in Evolution shares. The Swedish giant will issue around 1.1 million new shares to complete this deal.

Jens von Bahr, the chairman of Evolution, said that his company wanted this acquisition in order to strengthen its position “as the leading provider of digital casino games in the world.” On the other hand, Nik Robinson, Chief Executive Officer at Big Time Gaming, added that he expects the two teams to be a “perfect match” and predicted “a bright and entertaining future” for the players.

This wasn’t the first major acquisition deal for Evolution, the Swedish company completed in December 2020 the merger with NetEnt, the extremely profitable video slots and live dealer games developer.

That deal was worth around 2.3 billion dollars and it created a real industry giant, combining Evolution’s world class products in the live casino vertical with NetEnt’s award-winning video slots.

Evolution was launched back in 2006 as “Evolution Gaming,” and since then the company expanded its business all around the world. The Swedish firm now has over 3,000 employees in offices located in various countries.

Their live dealer games are broadcast around the clock from studios in Latvia, Canada and the United Kingdom. Over 100 global and local operators, both online and at land-based venues, have Evolution’s products in their offering. In 2020, Evolution was named Live Casino Supplier of the Year at the EGR B2B Awards.