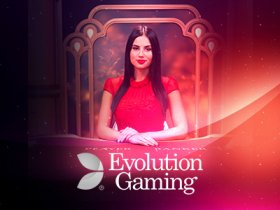 Evolution’s award-winning Lightning family was replenished with a brand-new Baccarat game. Unveiled at ICE 2020 as one of the twelve striking novelties produced by this global leader of Live Dealer solutions, it represents a truly unique take on a popular casino classic thanks to Lucky multipliers able to generate huge wins of up to €500,000!

According to people from Evolution Gaming, the masterpiece is “like no other baccarat game players have ever seen,” which is certainly a fitting description providing stunning visuals, thrilling sound effects, and, what’s the most important, engaging gameplay that combines totally electrifying experience with high-payout RNG wins.

Just like in standard Live baccarat, punters do their best to predict whose hand, player or banker, will hit the value closest to 9 and win. Yet, in contrast to the traditional version, after betting time has run out, spectacular effects announce the beginning of the Lightning Round striking between one and five Lightning Cards drawn from a virtual 52-card deck, each has a random multiplier.

The players’ goal is…

…to match one of the cards in the winning hand to a Lightning Card and as a result, hit one of the base-level payouts multiplied by 2x, 3x, 4x, 5x or 8x. But that’s not all because things are getting much better in the case a player has more than one match. For instance, with three matching cards, the total winnings can reach amazing 512x!

Still, the most exciting scenario comes in the form of a triumphant bet on a Tie with six matching Lightning Cards, which can lead to a mind-blowing multiplier of 262,144x! In fact, winnings can continue increasing all the way up to €500,000 plus the player’s stake. Quite naturally, given the possibility of really large payouts, a 20% Lightning fee is added to the total bet, which is evident in the game’s user interface.

Games That Light Up Live Casino

Baccarat is the third title in the successful Lightning series. The very first to hit online casinos was revolutionary Lightning Roulette, the winner of the whole three Game of the Year Awards in 2018.

Lightning Dice, a simple yet endlessly entertaining tumbling adventure, was launched in 2019 and attracted not only fans of table games but also slots and bingo buffs. The state-of-the-art trio lets punters plunge into lavish black and gold Art Deco environment, complemented by friendly Live Croupiers and random lightning flashes.

Evolution Chief Product Officer Todd Haushalter said: “Two years ago we launched the multi-award-winning Lightning Roulette, which has become one of the biggest games in company history. We followed this up with Lightning Dice, which has also been immensely popular. Adding multipliers and our Lightning theme on top of the most traditional game yet, Baccarat, was a natural next step in our Lightning family. Baccarat players love volatility and we are giving them all they can handle with Lightning Baccarat!”