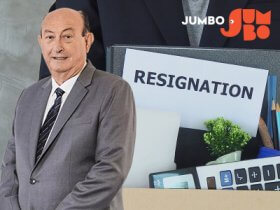 Jumbo Interactive Limited, the company which operates the popular Australian website ozlotteries.com under agreements with Tabcorp, announced that Mr David K Barwick has tendered his resignation as Director and Non-executive Chairman, due to the duration of his tenure.

Mr Barwick has been named Director on 30 August 2006 and Non-executive Chairman on 22 November 2007, serving the company and its shareholders for almost 14 years.

“David has played a key role in Jumbo’s success over the past 14 years by providing a guiding light through the early days of the Company’s development. On behalf of the rest of the board, I thank David for his efforts and wish him well in future endeavours.”

Mr Barwick will continue to act as Chairman and Board member until a suitable replacement is found by FY2020 Annual General Meeting expected to be held in October 2020.

Founded in 1995, Jumbo is a leading digital retailer of official government and charitable lotteries. It’s safe to say, the brand has always been at the forefront of e-commerce in Australia launching one of the world’s first online shopping malls.

In 2000, Jumbo started to sell lottery tickets online being early adopters of modern technologies able to deliver customers a far more convenient way to play their favorite lotteries. Signed in 2005, the agreements with Tabcorp (which became a substantial shareholder in Jumbo in 2017) are not required to be renewed but termination clauses with 12 months’ notice become available to either party in 2022.

…the major service run by this enterprise is undoubtedly one of Australia’s largest online operators providing that it processes more than AUD$150 million in lottery tickets sales per year and manages over 2 million customer accounts. Besides the ever-growing range of games, new users are attracted by numerous innovations such as Lotto Party which promotes social group play, iPhone/Android Apps and Google voice.

Constantly looking for new opportunities, in November 2018, Jumbo entered the Lottery SaaS (Software as a Service) market, signing in its first customers. Aiming to expand the business, in December 2019, the company acquired Gatherwell Limited and successfully entered the UK market, at the same time setting a new goal – to reach $1 Billion in ticket sales on the Jumbo platform by FY2022.

Source: “Resignation of David K. Barwick from role as Chairman and Board member“. Jumbo Interactive. April 14, 2020.