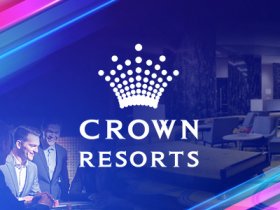 Crown Resorts announced new social distancing policies at its casinos in Melbourne and Perth. According to the updated rules, the number of customers in individual facilities is restricted to 100 persons.

Issued on Thursday, the release stated:

“Following consultation with the Victorian and Western Australian Governments, Crown’s social distancing policies at Crown Melbourne and Crown Perth have been amended to revise the restriction on the number of patrons in individual food & beverage, banqueting and conference facilities from 450 persons to 100 persons. All other previously announced measures will remain in place.“

On Monday Crown Resorts introduced a set of measures as a response to the novel coronavirus epidemic. Apart from the aforementioned restrictions per facility, Crown Melbourne also implemented restrictions per table allowing a maximum of five players at each stand-up table game.

In addition to that…

…every second gaming machine and electronic table were switched off aiming to keep punters apart. With the same goal, the casino applied greater distancing between players at seated games, including no standing players. All those measures remain in place until further notice.

Crown said, their social distancing policy was approved by the Victorian Chief Health Officer. Just a reminder, just a day before the Australian government strongly advised against non-essential gatherings of more than 500 people.

One of Australia’s largest entertainment companies…

…Crown not only owns and operates two of the country’s leading integrated resorts, Crown Melbourne and Crown Perth but also London’s Crown Aspinalls, an upscale venue located in the fancy West End district.

The Group has interests in a number of online businesses, including Betfair Australia, DGN Games, and Chill Gaming with the possession of 100%, 85%, and 50% respectively.

At the moment, Crown Resorts is building a $2.4 billion exclusive casino, hotel, and high-class apartment tower at Sydney’s Barangaroo that is expected to open its doors at the first half of next year.

Last May, the company agreed to sell 20% of Crown shares to Hong Kong casino group Melco but the latter broke off the deal, apparently due to certain financial problems caused by the Covid-19 outbreak in Asia.