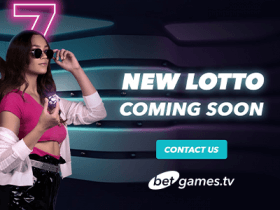 BetGames.TV, one of the world’s fastest-growing providers of live dealer games, has announced a strategy change for the near future: the company will bring its Lotto games to the top of their priority list.

That means the company’s existing and already successful lotto products will be relaunched after receiving various enhancements. BetGames.TV has redesigned and rebuilt its Lucky Lottery studios, which now have a cutting-edge look and feel, along with new features, improved security and technical advances.

This strategy switch was made because BetGames.TV desires to become a reference point in the industry when it comes to lotto games, allowing the company to grow by tapping into the potential of new markets.

BetGames.TV currently offers 12 live dealer games, which are broadcast from the company’s studios in Malta and Lithuania to customers in over 40 countries around the world.

BetGames.TV has announced that three of its most popular games have received improvements: Lucky 5, Lucky 6 and Lucky 7. All these games now have new backdrops, nice-looking graphical balls and a full-HD broadcast.

Moreover, Lucky 7 has received a further enhancement as the company’s Emerald machine is now deployed for this game. The machine was trialed with Lucky 5 and it produced an impressive revenue surge.

The studio will feature multiple additional cameras which add, along with better looks, an improved layer of integrity to the company’s lotto games, allowing players and auditors to have access to all angles of the production area.

BetGames.TV will now have the ability to use either a remote presenter or random number generator technology in pre-recorded videos, allowing the company to remove any language-barrier problems that could arise in certain territories.

Risk mitigation has also been developed substantially for the lotto games, ensuring future pandemic-proofing and providing the ability for the broadcasts to continue even in case of nationwide lockdowns.

Andreas Koeberl, the Chief Executive Officer of BetGames’TV, revealed his belief that by revamping the lotto games the company will “see significant growth in several areas including bet counts, time-spend, player retention and ultimately, increased revenue.” Moreover, the CEO added that the company’s commercial proposition “will be unrivalled in the market”.